India’s Mars Orbiter Mission (MOM) has successfully completed its designed life of 6 months on 24 March 2015 and accomplished its planned mission objectives.MOM is continuing to function normally and is completing two years around Mars on September 24, 2016. At present MOM and all its scientific payloads are in good health and it continues to provide valuable data of Mars surface and its atmosphere.

MOM carries a suite of five scientific payloads with a total mass of about 14 kg. The three payloads which have been designed, developed and delivered by Space Applications Centre are:

Snapshots from the portal: 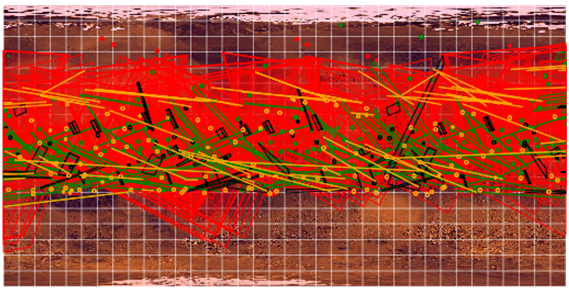 Researchers and common public who is downloading the Mars Orbiter Mission data sets, are required to acknowledge the ISRO for data, funding (if granted) and the research writeups taken from the archive.

2. If you are using the results of Mars Orbiter Mission which are already published and carrying out further interpretation or modeling, please include the following statement in acknowledgment –

“The research is based partially / to a significant extent (whichever is applicable) on the results obtained from the Mars Orbiter Mission (MOM), first inter-planetary mission of the Indian Space Research Organisation (ISRO), archived at the Indian Space Science Data Centre (ISSDC)”

Global wind data, which is very crucial for cyclone detection and weather forecasting applications, was gathered by Scatterometer instrument flown as one of the payloads in OCEANSAT- 2 satellite. This data was utilised by national and international users and proved to be a very important tool for oceanographic studies. SCATSAT-1 is the continuity mission for Scatterometer payload carried by the earlier Oceansat-2 satellite.

The magnitude and direction of the wind vector at the ocean surface is a key parameter for weather prediction as well as detection and tracking of cyclones. The objectives of SCATSAT-1 are to facilitate the weather forecasting services to the user communities through the generation of wind vector products. The Ku-band Scatterometer payload carried by SCATSAT-1 has enhanced features compared to the similar one carried by Oceansat-2 launched in 2009

Scatterometer operates on the principle of radar. When the radar radiates energy pulses towards the ocean’s surface, a backscatter effect is produced due to interaction between electromagnetic waves and sea surface waves, which is function of speed and direction of surface winds over the oceans.

This process of receiving back-scattered signal is carried out while conically scanning or rotating the antenna along with the motion of the satellite giving a swath of 1400 km. The collected data is processed onboard to generate estimates of backscattered power/signals and stored on a data recorder. This recorded data is then transmitted to ground station which is converted into wind vectors for the global user.

SCATSAT-1 is built around ISRO’s small satellite ‘IMS-2 BUS’ and the mass of the spacecraft is 371 kilograms. The spacecraft will work in sun synchronous orbit of 720 km. altitude with an inclination of 98.1 deg. This will be a polar orbiting satellite and will take two days to cover the entire globe. The expected life span of the satellite is 5 years with non-stop 24 X 7 all weather operations. Wind speed is measured in the range of 3m/s to 30m/s and 0-360 deg directions. Finally, wind vector grids of 25kms*25kms over oceans will be generated for the entire globe.

SCATSAT-1 is a global mission and data generated from the Scatterometer, developed by ISRO will also be utilized by the American space agency NASA and European Space Agency organization, EUMETSAT to provide global weather data to all those involved in weather studies and global climate change studies.

Researchers have combined satellite imagery with AI to predict areas of poverty across the world. There’s little reliable data on local incomes in developing countries, which hampers efforts to tackle the problem. A team from Stanford University were able to train a computer system to identify impoverished areas from satellite and survey data in five African countries.

“The World Bank, which keeps the poverty data, has for a long time considered anyone who is poor to be someone who lives on below $1 a day,” Dr Burke, assistant professor of Earth system science at Stanford, told the BBC’s Science in Action programme.

“We traditionally collect poverty data through household surveys. We send survey enumerators around to houses and we ask lots of questions about income, consumption – what they’ve bought in the last year and we use that data to construct our poverty measures.”

However, surveys are costly, infrequent and sometimes impossible to carry out in particular regions of countries because of, for example, armed conflict.

So there is a need for other accurate measures of household consumption and income in the developing world. The idea of mapping poverty from satellite imagery is not completely new. Recent studies have shown that space-based data that capture night lights can be used to predict wealth in a given area. But night lights are not such a good indicator at the bottom end of the income distribution, where satellite images are dark across the board.

The latest study looked at daylight images that capture features such as paved roads and metal roofs – markers that can help distinguish different levels of economic wellbeing in developing countries. They then used a sophisticated computer model to categorise the various indicators in daytime satellite images of Nigeria, Tanzania, Uganda, Rwanda and Malawi.

“If you give a computer enough data it can figure out what to look for. We trained a computer model to find things in imagery that are predictive of poverty,” said Dr Burke.

“It finds things like roads, like urban areas, like farmland, it finds waterways – those are things we recognise. It also finds things we don’t recognise. It finds patterns in imagery that to you or I don’t really look like anything… but it’s something the computer has figured out is predictive of where poor people are.”

The researchers used imagery from countries for which survey data were available to validate the computer model’s findings. “These things [that the computer model found] are surprisingly predictive of economic livelihoods in these countries,” Dr Burke explained.

The researchers say their ambition is to scale up the technique to cover all of sub-Saharan Africa and, afterwards, the whole of the developing world.

This entry was posted in GIS, Remote Sensing.

Raleigh Cleans Up with AppStudio for ArcGIS

Raleigh, North Carolina, is one of the fastest growing areas in the country. Between 2000 and 2014, the city’s population increased by 59 percent. Downtown Raleigh has experienced dramatic growth in new residents and businesses as well. The downtown’s retail base has increased by over 35 percent in the last four years, and events, festivals, museums, and attractions bring more than 3.5 million visitors to the downtown area each year.

Last fall, residents, and business owners raised concerns about litter and cleanliness in downtown. Although multiple groups—including the Downtown Raleigh Alliance’s (DRA) Clean Ambassadors and staff from the departments of Parks, Recreation and Cultural Resources and Solid Waste Services—contribute to keeping downtown clean, the demand was outweighing available services. So the City of Raleigh turned to its robust GIS—and used AppStudio for ArcGIS for the first time to figure out what to do.

Raleigh’s Office of Sustainability and DRA worked with their service partners to form a task force and create a plan of action for tackling the city’s litter problem. An eight-member team from the Parks, Recreation and Cultural Resources and Solid Waste Services departments was looking for a tool to gather location-based information about the density and types of litter in downtown. The City of Raleigh’s sustainability manager, Megan Anderson, contacted Raleigh’s GIS team to get help.

The litter audit took place in October 2015. The eight city staff members doing the audit received less than 15 minutes of training on the user-friendly mobile app, called Litter Reporter, just before they went out for the first time. Following the Clean Ambassadors’ cleaning routes, the auditors walked downtown six times a day at specific intervals over a period of three days to collect litter data. When they spotted litter, they photographed it; geotagged the location; and used the app’s quick-select menu to categorise it as paper, cigarette butts, containers, bottles, cans, food, or cardboard, for example. (Image: The Litter Reporter app allows users to photograph litter, geotag its location, and select its type.)

The department continues to use Litter Reporter every quarter to monitor trends and figure out how to efficiently manage litter downtown. Supplemental audits follow the same methodology, routes, and times as the first audit to ensure that the city is monitoring accurate trends.

“In general, there is a lot of information and buzz around smart cities and how cities are utilizing technology,” said Anderson. “The litter application is an example of how quickly the tools can be deployed to help cities gather data and make informed, smart decisions about how they deliver service. The process is an excellent model for understanding challenges faced by growing cities.”

ArcGIS—and especially AppStudio for ArcGIS—allowed the GIS team to collaborate deftly with the task force, providing its members with the tools they needed to gather data quickly and create actionable reports. Staff at the City of Raleigh will continue to use data and reports from the litter audit app to work cross-departmentally with DRA to evaluate options for increased levels of service downtown.

This entry was posted in GIS.