Indian Drone Policy: Guidelines to Use Drones Under a Legal Framework

After a couple of years of deliberation and ending a long period of ambiguity and confusion, the Director General of Civil Aviation (DGCA) has finally announced its policy for remotely piloted aircraft or drones. Set to come into effect from December 1, 2018, the new policy defines what will be classified as remotely piloted aircraft, how they can be flown and the restrictions they will have to operate under. Here is a look at the policy in detail.

The DGCA has defined remotely piloted aircraft (RPA) as an unmanned aircraft piloted from a remote pilot station. “The remotely piloted aircraft, its associated remote pilot station(s), command and control links and any other components form a Remotely Piloted Aircraft System (RPAS),” the policy states. Also, as per the civil aviation requirements – issued under the provisions of Rule 15A and Rule 133A of the Aircraft Rules, 1937 – these RPAs will need a Unique Identification Number (UIN), Unmanned Aircraft Operator Permit (UAOP) and need to adhere to other operational requirements.

There are two key restrictions that have been put in place for the safe use of drones. The drones will be allowed to fly only along visual line-of-sight and only during day-time with a maximum altitude of 400 feet. The rules announced August 27, 2018, are called Drone Regulations 1.0.

Safety regulator DGCA has put drones into 5 categories based on their weight, namely nano, micro, small, medium and large:

All drones, other than in the nano category, shall apply to DGCA for import clearance and based on that Directorate General of Foreign Trade shall issue a license for import of RPAS.

Operators of civil drones will need to get a permit from the DGCA. There are exceptions for:

The DGCA has to issue the UAOP within seven working days provided all the documents are complete. This UAOP shall be valid for five years and not transferable. The policy also stipulates that RPAs shall be flown only by someone over 18 years of age, having passed 10th exam in English, and undergone ground/ practical training as approved by DGCA.

How can drones be operated in India? 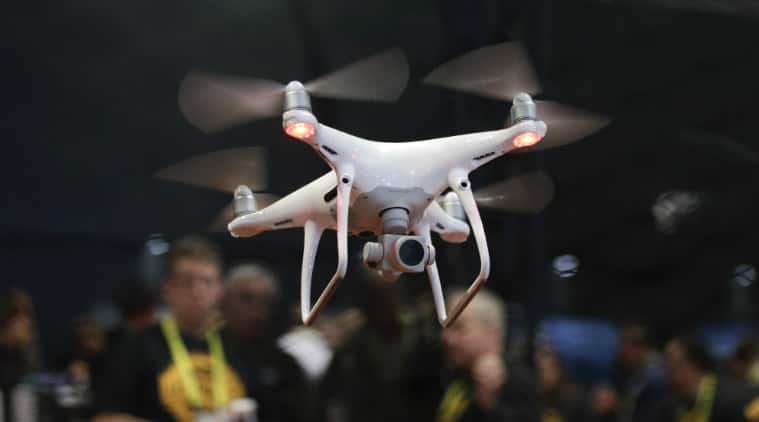 (The basic operating procedure will restrict drone flights to the daytime only and that too within “Visual Line of Sight (VLOS)”.  (Image Source: Bloomberg))

The basic operating procedure will restrict drone flights to the daytime only and that too within “Visual Line of Sight (VLOS)”. This applies to all categories. Also, along with other SOPs, the DGCA has clarified that no remote pilot can operate more than one RPA at any time. Plus, manned aircraft will also get priority. There can’t be any human or animal payloads, or anything hazardous. It cannot in any manner cause danger to people or property. An insurance will be mandatory to cover the third-party damage.

What are the restrictions in place for drones in India?

Violations will be acted on under relevant sections of the IPC and the Aircraft Act 1934.