The government of Chhattisgarh will undertake a survey using remote sensing technology for mapping the location of ponds, rivers and other water bodies to encourage fish farming in the State.

“The State has sufficient number of ponds, water bodies and rivers to produce fish of any variety. Therefore, the government is carrying out a remote sensing survey to identify location of these water bodies to use them for fish rearing,” a government official said here Wednesday.

Four tonnes of fish are being produced at each cage culture. So far, 475 tonnes fish was produced this way, he added. Farmers from Odisha, Maharashtra, Jharkhand, Bihar, Tamil Nadu, Andhra Pradesh, Uttar Pradesh, West Bengal and Himachal Pradesh had visited the State to learn the technique. — PTI

GeoMesa is an open-source, distributed, spatio-temporal database built on a number of distributed cloud data storage systems, including Accumulo, HBase, Cassandra, and Kafka. Leveraging a highly parallelized indexing strategy, GeoMesa aims to provide as much of the spatial querying and data manipulation to Accumulo as PostGIS does to Postgres.

This entry was posted in GIS.

Coastal areas always have been vulnerable to flooding, but likely will experience increased risk in the future due to anticipated impacts of climate change, such as sea-level rise and increased storm and rain intensity.

Population densities in coastal regions have increased almost 40 percent in the United States since the 1970s and are expected to rise 8 percent more by 2020, according to NOAA. Therefore, a higher percentage of people will be at risk to flooding and other coastal hazards in the future. 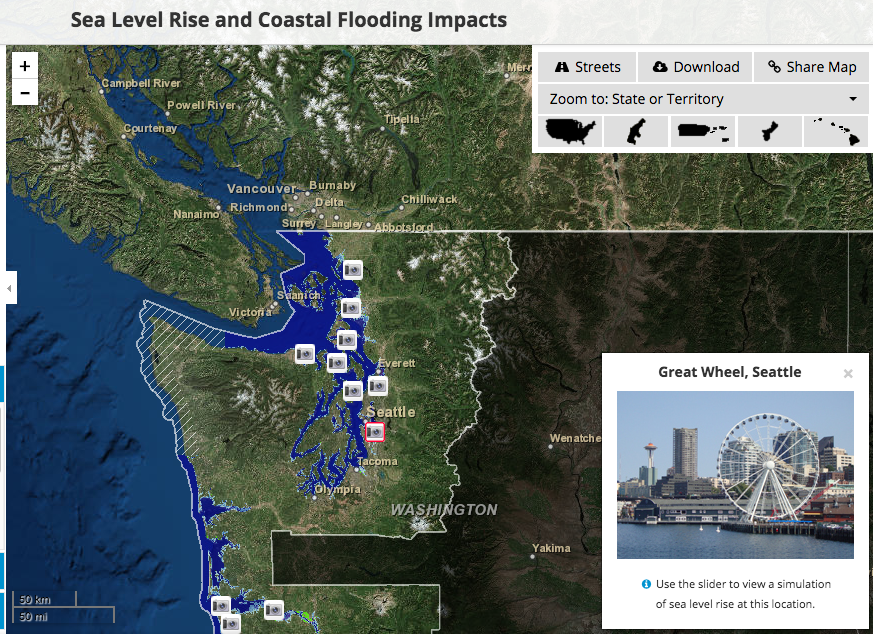 How should these maps be used? Visualizing uncertainty

Sea-level rise maps indicating areas potentially prone to future inundation are valuable tools for decision makers. Interactive maps can be used as outreach tools to increase public education and awareness about coastal hazards or to evaluate areas that are vulnerable to coastal hazards on larger geographical scales (global, national or state).

These maps are also very good for providing education on the effects of sea-level rise. However, higher resolution mapping is needed to make specific decisions at the local level, for example, at the scale of siting a building or energy substation. This is partially because the sources of error and specifics about the amount of error in the models and data are often underrepresented when people look at these maps, often due to difficulty visualizing and explaining uncertainty.

While the world’s indigenous people are estimated at only around 370 million, or about 5 percent of the global population, they reportedly speak 95 percent of the world’s languages. Yet they remain virtually unrepresented both politically and economically. Often, their lives and livelihoods are under threat from the competing economic needs of others living within their countries. But with increased attention from the United Nations, nonprofit organizations, and volunteer groups, greater awareness and understanding of the rights of indigenous people have emerged at the international level, providing them with some legal standing.

Photo : With their territory mapped, the Mbendjele tribe can protect treasured trees from being cut down by logging companies. (Photo courtesy of Gill Conquest.)

Since 1994, Lewis has worked as an anthropologist with the Mbendjele, a nonliterate group of indigenous hunting and gathering people living in the Republic of the Congo.

“Logging has been imposed over the lands of indigenous people across the region,” said Lewis. “The legal system hardly recognizes the rights of local people.”

One of the local logging companies, Congolaise Industrielle des Bois, chose in 2006 to become Forest Stewardship Council certified, which identifies the company as environmentally and socially sustainable in its forestry operations. Part of the certification requires that the company respect the rights and resources of indigenous and local forest people.

To help clear up these communication issues, Lewis developed an icon-driven mapping application that the Mbendjele could use to map their key resources and protect them from logging-induced damage. While this application worked for several years, by 2013 the software and hardware were outdated. So Lewis and Haklay founded the ExCiteS team to create more durable mapping solutions for the Mbendjele and other indigenous peoples.

Stories are a very important aspect of our society, and storytelling is one of the things that make us uniquely human. Stories convey important knowledge about the world around us, often in a simplified yet dramatic fashion designed for maximum impact. We have much to learn, remember, and understand in life, but wrap a great story around something and it will make an impression on us that lasts a lifetime.

So where do maps fit in the storytelling realm?

Story maps use geography as a means of organizing and presenting information. They tell the story of a place, event, issue, trend, or pattern in a geographic context. They combine interactive maps with other rich content—text, photos, video, and audio—within user experiences that are basic and intuitive.

Sentinel-3 will provide high-accuracy optical, radar and altimetry data for marine and land services, measuring variables such as sea surface topography, sea- and land-surface temperature, ocean colour and land colour with high-end accuracy and reliability. The first
Sentinel-3 satellite (S-3A) was launched on 16 February 2016 and is supporting ocean forecasting systems, as well as environmental, agriculture and climate monitoring. A second satellite (S-3B) is scheduled for launch in 2017.

The mission is expected to begin operations in five months, delivering Earth obseration data worldwide and free of charge for all users.

The Sentinel-3A satellite will deliver data within three hours of sensing, 24 hours a day, 365 days a year. While these data will be fed primarily into the Copernicus Marine Environment Monitoring Service, all the Copernicus services will benefit from it, as the satellite will systematically measure also Earth’s land, ice and atmosphere with a suite of cutting-edge instruments.

Coal India to use drone for exploration

Coal India is planning to start using drones to conduct aerial surveys of blocks that come up for exploration and to assess the extent of greenery restored after mines are closed, helping it to cut costs and save time.

Drones can also be used to replace data captured by satellites in terrain where data is not very clear. Being at such heights, satellites do not always capture data that can be useful – drones can replace them. Such data would be used to generate geological reports, which need to be submitted to the government before exploration is initiated in any block. Capturing data electronically would help streamline the data and it would be more organised than manual operations.
Coal India also plans to use drones to assess the level of coal stocks at its yards to help determine how much has been liquidated or added.
Read more